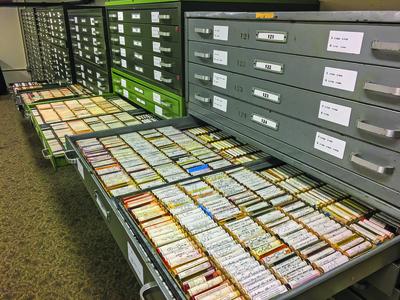 It takes a lot of drawers to hold the Max Weaver Dye Library. Each drawer holds between 600 and 1,000 vials.

A college of textiles is an unexpected place to find a chemist trained in high-resolution mass spectrometry. But the Wilson College of Textiles at North Carolina State University had something that attracted Nelson R. Vinueza: It is home to the Max A. Weaver Dye Library.

Weaver, a longtime researcher at Eastman Chemical, and his team collected dyes from the company over a period of more than 30 years. His efforts resulted in a treasure trove of about 98,000 vials of dye molecules dating from the 1960s to the 1980s, which Eastman donated to NC State in 2013, along with accompanying fabric swatches. NC State hired Vinueza that same year, and he’s now codirector, with Harold S. Freeman, of the dye library.

The library team is working to make the collection publicly available, in part to encourage researchers to find new uses for the compounds other than as textile dyes. As a first step toward that goal, Vinueza, computational chemist Denis Fourches, and coworkers have digitized and analyzed the structures of 2,700 of the dyes. The team recently reported the results of this work, giving chemists a first glimpse at the structural diversity within the collection (Chem. Sci. 2017, DOI: 10.1039/C7SC00567A).

END_OF_DOCUMENT_TOKEN_TO_BE_REPLACED

Demands for colorful, cheap, and diverse dyes drove the transformation of chemistry into a modern science. To some, it may seem like dyestuffs are the stuff of times past. A dye collection recently donated to a university, however, might show that these compounds still hold the key to some cutting-edge chemistry problems.

Eastman Chemical has donated a dye collection spanning 50 years of the company’s research, beginning in the 1940s, to North Carolina State University. The library includes vials filled with vibrant powders, each meticulously hand-labeled; coordinating envelopes stuffed with dyed fabric swatches and testing data; and post-World War II intelligence reports on the German dye industry. The collection is named for the late Max A. Weaver, a longtime Eastman research leader who made the library his life’s work.

“This dye collection is a research treasure trove,” says David Hinks, director of the university’s Forensic Sciences Institute. NC State has agreed to build a digital database of the approximately 98,000 compounds. All of the structures, previously trade secrets, will become available to the public on the Royal Society of Chemistry’s ChemSpider database.

Kelsey puts her passion for sharing science into practice

Kelsey Boes, one of our current PhD students, took her enthusiasm for strong science communication to DC. With degrees in both chemistry and studio art, Kelsey passionate about both science and design. What truly excites her is not only discoveries but also sharing them in dynamic and thoughtful ways. END_OF_DOCUMENT_TOKEN_TO_BE_REPLACED

Yufei Chen, the longest standing member of the group, received his Master’s Degree in July 2015. His project explored fragmentation pathways of anthroquinone-based dyes from the Eastman Dye Library bequeathed to the NC State Wilson College of Textiles in 2013. Yufei’s work confirmed and corrected the vast database of dye structures through careful mass spectrometric analysis. He is excited to begin work on his PhD under Dr. Vinueza and Dr. Freeman.