In the late 1980s, NC State University and North Carolina A & T State University jointly claimed a NASA research grant to aid the research to place human explorers on Mars in the 21st Century. (1) Professors Mansour Mohamed and Aly El-Shiekh of the College of Textiles proposed using high-strength fibers to construct woven and braided shapes.  Their research was in conjunction with programs in the College of Engineering at NCSU and NCA&T. 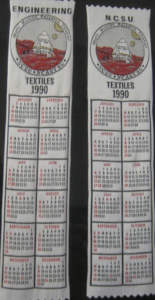 The 1990 bookmark came in two varieties:  One with the words “Engineering” across the top and “Textiles 1990” below the central emblem of the Mars Mission.  This tape would be available for both engineering programs at NC State and NC A&T.  The second tape was clearly “N.C.S.U.” and “Textiles.”  The central emblem depicted an artist’s idea of what a Mars Lander might look like keeping in mind this was intended to be a manned mission.

The emphasis for 1991 was education.  The move to a new building in January 1991 saw the reorganization of all degree programs into two departments:  Textile Technology and Management; and Textile Engineering, Chemistry and Science.

The 1992 bookmark featured a map of North Carolina with a star showing the location in Raleigh.

In 1993, a simple black box contained the repeating words “Textiles” in gold letters and “NCSU” in red.