Professor Berry established the tradition of an annual bookmark designed and woven by students at the School of Textiles at North Carolina State College in 1960.  When Professors Sol Hersh and Paul Tucker collected a set for presentation to the Smithsonian Institute, they were unable to find an example for 1970 as Professor Berry retired and another weaving and designing professor took over the senior class project.

The 1971 calendar featured the NCSU wolf mascot with the traditional red cap and white border with the letters “NCSU” in red.  The wolf holds a boat shuttle in his jaw.  On either end of the shuttle is a length of chain holding the month-by-month calendar.  The date “1971” is woven in large red numeral in descending then ascending order.  Below the calendar is woven “Phi Psi Eta.”  The Phi Psi National Textile Fraternity was established in 1902 at Philadelphia Textiles.  Active chapters today include NC State Iota established in 1924.  (Technician April 10, 1931) A wonderful photo of the “Lintheads of 1939” is in the Special Collections at NC State 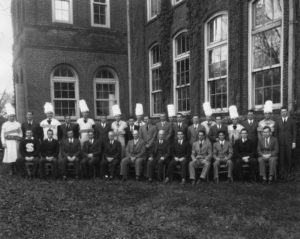 There is no known copy of a 1972 calendar bookmark.

The 1973 bookmark was woven using the 1971 design with the Phi Psi Eta caption deleted.  Overall, the design was woven in larger scale with bolder borders surrounding each month.  Also, the months were arranged in an unusual stacking, with January through April in the left column, May through August in the center column, and September through December in the right column.

In 1974, a new design was chosen to include a circular design incorporating the university’s bell tower in the center and “NORTH CAROLINA STATE UNIVERSITY” in red letters and “AT RALEIGH” in black within the circular border.  At the bottom of the bell tower, the date “1974” was woven in red.  Just above the calendar, “TEXTILES” was spelled out in bold red letters.

The bookmark for 1975 featured basketball.  The central designs featured a strutting wolf dribbling a basketball.  The word “TEXTILES” appeared at the top followed by the first six months of the year.  The dates “1975” in bold letters bracketed the wolf.  Above his head “N.C. STATE UNIVERSITY” in bold red letters.  Below the wolf “1974 NCAA CHAMPIONS”

NC State won the 1974 National Basketball Championship.  NC State snapped UCLA’s run of seven consecutive NCAA championships – as well as the Bruins’ 38-game NCAA tournament winning streak, when the Wolfpack knocked them off in double-overtime in the Final Four.  Fun fact:  NC State never had to leave North Carolina to get to the Final Four played in Greensboro!

In honor of the Bicentennial, the 1976 bookmark featured a patriotic design with the American Eagle.

The 1977 design showed a flag from 1777 and the current flag.   A very patriotic Uncle Sam wearing a top hat dominates the center.

The 1978 bookmark honored the American Association for Textile Technology.  The months were stacked January through June to the left and July-December to the right.

The 1979 bookmark brought back the wolf and the old spinning wheel.