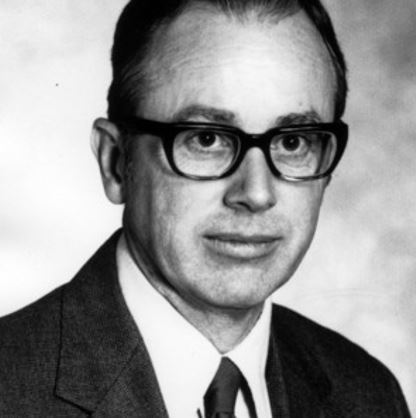 Wilson M. (Bud) Whaley was hired in Spring 1975 to replace retiring department head, Henry A. Rutherford. (8) Bud retired from an industrial career with a genuine interest in developing graduate research by using a “walking around” management style.  Every morning he walked around to the various labs and offices to see how things were going.  Was there anything he could do to help?  It was a non-adversarial way to find out what was on our minds.

Bud was educated as a pharmacist at the University of Maryland.  He aspired to chemical research and after receiving his Ph.D. at the University of Maryland in 1947, conducted post-doctoral studies under the late Prof. Roger Adams at the University of Illinois.  He had a long and interesting industrial career with many prominent companies, including Pabst Brewing in Milwaukee, WI and at Burlington Industries, Greensboro, NC.  During his time at Burlington Industries, he became especially interested in dyestuff synthesis and became good friends with Dr. Kurt Dellian, a research chemist with Ciba-Geigy, Inc., in Greensboro.   After he retired, Dr. Dellian often dropped by the Textile Chemistry department to talk about research. (5)

Upon his arrival at NC State, Bud began a program to improve the appearance of the building.  With a fresh coat of paint on a wall just inside the main door of David Clark Labs, Bud decided to use an overhead projector to give an image of the ball and stick molecular model of Polyethylene Terephthalate, the leading textile polymer and another of cellulose, the molecule of cotton, onto the wall and paint each atom a bright fresh color. (5)

Bud also took over an introduction to polymer chemistry course from the previous department head, Hank Rutherford, and wrote a beautiful set of notes, based on a standard organic/polymer chemistry text by Hart and Hart, but with many practical chemical examples from his years of industrial chemistry.  When he hired Gary Mock in the fall of 1976, he asked him to sit in on Ken Campbell’s Dyeing and Finishing class with idea that he, Mock, would teach that course in the spring of 1977.  He also had him sit in on the polymer chemistry course.  After one semester, Bud handed that over and Mock was off and running with a beautiful set of notes for that course.  It was a baptism with fire for a chemical engineer who had no formal dyeing and finishing courses (but plenty of on-the-job training at Deering Milliken Research Corporation) and absolutely no polymer chemistry as traditional chemical engineering hardly recognized polymers in those days. (5)

Jack Daniels remembers asking Bud to start teaching an elective in dye synthesis.  Upon graduating with a BS in Textile Chemistry in 1972, Jack went to work for Deering Milliken Research Corporation and worked for Dr. Hans Kuhn who had invented the Versatint® internally colored water soluble polymers that provided fugitive coloring to fibers, detergents and other materials. (4)

When Jack began work at AATCC as Lab Manager in 1974, he decided to work on his MS in Textile Chemistry.  When he got to know Bud, Jack told him of his interest in dye synthesis and asked him why the College did not teach such a course.  Bud told him that with his background in pharmaceuticals, he would be willing to develop the course, if Jack could get at least five other students to take it.  He convinced among others, Leon Moser, Cliff Seastrunk, and Chuck Stewart (an undergrad TC at the time) to take the course.  There were about 15 in the class. (4)

Jack was the first (1981) at NCSU to receive an MS with Bud as an advisor.  He suggested work on a project Kurt Dellian had conceived, which was the synthesis of new dyes having malonic acid moieties.  The sodium salt of the malonic acid group was supposed to render the dye water soluble, and then after applied, should be able to decarboxylate, rendering the dye insoluble.  Such performance was to improve wash fastness on cotton, as the dye would no longer have water-solubilizing groups, and the dye might also, in a Thermosoling process, be able to dye both polyester and cotton.  The decarboxylated dye would be similar to a disperse dye structure having no solubilizing groups.  The decarboxylation left a methyl group in place of the carboxylic acid group.  Some actually worked! (4)

Bud conducted research with graduate and undergraduate students in two principal areas.  His initial research was conducted in collaboration with the Research Triangle Institute (RTI) and pertained to the synthesis of blue dyes that could be used to aid the detection of Freon refrigerant leaks, giving rise to 2 US patents, 2 journal articles, and 1 MS thesis.  His second research program was funded by IBM Corporation and involved the design and synthesis of black dyes for ink-jet printing.  This program led to an enhanced understanding of the relationships between the molecular structures of azo dyes and their mutagenic properties, and led to 3 MS theses and 3 journal articles.  His third research area involved the synthesis of phosphonic acid reactive dyes for cotton and produced 1 MS thesis and 1 journal article. (2)

Jack remembered Bud as a very caring advisor.  He worked on his thesis at AATCC and in a lab he shared with Frank Calogero in the basement of David Clark Labs.  Late one evening Bud came in the lab to show him how and help run a hydrogenation reaction for one of the dyes he was working to synthesize.  Jack always found him very helpful, friendly, and encouraging. (4)

Bud hired Prof. Harold S. Freeman, in 1982, to team with him and eventually succeed him in overseeing the dye synthesis program.  Dr. F. Ivy Carroll, a distinguished medicinal chemist at the Research Triangle Institute collaborated with Bud on the dyes for the Freon projects. (2, 7)

Phasing out as Head of Department

Bud appointed Charles D. (Charlie) Livengood as his assistant department head.  Charlie was a great teacher and very capable administrator.  That was just great for Bud.  After the first few years of attending dean’s council meetings to re-solve old problems, Bud was often “helping a graduate student” when the meeting time approached.  Could Charlie please attend in his place?  Of course, Charlie had no choice.  Pretty soon, the dean got wise to these happenings and Bud was not a fair-haired boy.  He also made plans to retire in 1985 and return to teaching and directing his graduate students.  Charlie was in line to become department head. (5)

Each summer, Bud also found time to go sailing the inland waterway with his wife.  As retirement neared, Bud had a new, larger boat and planned a full summer of sailing.  As the start of the fall semester approached, Bud contacted, Jo Warren, the Business Manager, and told her to process his retirement papers, a full year ahead of time.  Life on the boat was too good.  She told him that he had to come in and personally sign the papers.  Bud dragged his feet and as far as we know, he never came to the college again. (5)

Following his retirement in 1985, the Textile Chemistry department established an award in Bud’s honor to be presented annually to an outstanding sophomore majoring in Textile Chemistry at NCSU. (2, 6) The award continued through 2016 and hopefully beyond.

Over the course of his career, Bud had several expensive hobbies: cars, boats and flying.  He cautioned that you could only afford one at a time.

Selected Publications  (of more than 40) and Patents (5)