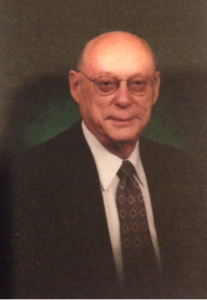 Solomon P. Hersh (Sol) was born on January 14, 1929, the son of Max and Millie Hersh.  He graduated from Reynolds High School in Winston-Salem and matriculated in the School of Textiles, NC State College in 1945.  He earned the B.S. in Textile Chemistry & Dyeing in 1949 and entered the Institute of Textile Technology, Charlottesville, VA.  He earned an MS Textile Technology in 1951.  He entered Princeton University as a Textile Research Institute Fellow and earned the M.A. Physical Chemistry in 1953 followed by the Ph.D. in Organic Chemistry in 1954.  Sol married Rosalie Peskin on February 21, 1954. (3)

Sol became a Research Chemist 1954-1962 with Union Carbide Corporation, S. Charleston, W. VA. He was promoted to Senior Research Chemist and moved to the Chemstrand Research Center, Inc., Research Triangle Park, NC, where he worked until 1966. His first patent on acrylonitrile spinning solutions was issued in 1961. Eight other patents covering coatings and nylon tire cord would follow.

Dean Malcolm Campbell of the School of Textiles was intent on strengthening the faculty with the idea of beginning a Ph. D. program.  Sol was one of several people with an earned Ph.D. who came into the School in the mid-1960s.  “In his early work, Hersh developed an elaborate system providing precise control of the geometry and contact force between rubbing fibers.  With this apparatus, it became possible to make careful quantitative measurements of the static charge generated when fibers are rubbed together.”

“From these measurements, he developed a theory of charge generation based on the band theory of solids.  He also introduced new techniques for increasing the accuracy of measurements of the electrical conductivity of fibers.  Hersh continued his work in this area during several years of industrial research with Union Carbide Corporation and the Chemstrand Research Center, Inc.” (29)

Sol began teaching, administering and researching in 1966.  His work on acrylonitrile polymers and stabilization of cellulose for crease proofing at Chemstrand were of immediate interest to his colleagues.  “ Since joining the textiles school faculty in 1966, Hersh has initiated further research on static electricity in addition to important studies of carpet mechanics and yarn texturing.  Fundamental studies of the mechanics of yarn bending and the geometry, deformation, and recovery of carpets led to better carpet design.  Improvements in resiliency and luxuriousness were obtained based on structural and design changes.  Further improvements were made possible through studies of chemical modifications of fibers.  His recent studies of the techniques of producing yarns which are used in double knit and stretch woven fabrics have concentrated on improving the efficiency of the process and the uniformity of the yarn produced.” (29)

Sol was named Head of the Textile Physics Laboratory and the Instrumentation Laboratory.  Perry Grady was recently brought in from Electrical Engineering to help with electronics and data acquisition.  Sol and Perry began working together and working with others, as their research needs required data analysis.  An early series of papers appeared first as articles in the student publication Textile Forum and later in the American Dyestuff Reporter. (16,17)

The apparel industry was also interested in the effect of high-speed sewing on needle heating and the resulting melting of thermoplastic fibers.  Papers were written for trade magazines, one was translated into Hebrew and another published in the prestigious Textile Research Journal. (18-21)

The carpet industry was in the midst of a transition from cotton and wool woven rugs to nylon and acrylic tufted carpet.  Sol and Aly El-Shiekh looked at various combinations. (22-24)

Color was also of interest, especially to dyers who wanted a way to measure the final dry color of a textile substrate while the sample was still wet coming out of the dye machine.  Sol cooperated with George and Herta Goldfinger. (10)

Sol’s interests in measuring physical properties caught the attention of conservators of textiles who were interested in better preserving ancient textiles. (11) Various polymeric materials and grafting monomers were applied to artificially aged cotton fabrics to better advise the sponsor about potential reinforcing agents for fragile textiles.  It took a team to propose the testing (Hersh), a member to suggest the polymer chemistry (Walsh) and a microscopy expert (Tucker) to best work with the graduate student (Berry).  Such was and is the nature of university research where the team gets together to view the problem and propose a solution to that problem.

This work was sponsored by George Washington University and The Textile Museum in Washington, D.C. https://museum.gwu.edu

Work continued on cotton fabrics over the course of several years (12).  Dilute suspensions of cotton and wood pulp were passed through specimens and fixed using acrylic resins and microwave drying and curing.

Degradation of silk by heat and light was studied in order to evaluate stabilizers.  Again, preservation of historic fabrics led to this sponsored work by The Textile Museum.  Several graduate students including Kurippillai and Becker assisted the team. (13-15)

For many years prior to studies in the 1970s, textile mill workers in yarn spinning and weaving operations exhibited lung damage symptoms similar to those of coal miners.  Coal miners developed black lung disease; textile workers developed byssinosis or brown lung– a pulmonary disease associated with inhalation of cotton processing dust.  For years, workers in card rooms and weave rooms were commonly known as “lint heads, because their heads would be covered with a fine layer of white cotton fibers after working for a few hours.  They believed that the real culprit in byssinosis was not in what we saw but what was unseen and could easily pass through our nostrils into the lungs.

Sol began a research project with Subhash Batra and Ray Fornes to look at the content of cotton dust in the air of card rooms.  They built a model card room on the third floor of Nelson Hall and began the study of air-borne dust particles.  (6) Paul Tucker and Richard Gilbert also joined the research team.  By 1973, this became the largest integrated research program in the School of Textiles (2, page 147-48) The cost to reduce dust levels by changing the water supply to humidifiers and water wash systems was shown to be significantly lower than using conventional electrostatic precipitation methods.  This pioneering work led to measurable reductions in airborne lint and finer particulates as cards were completely enclosed and redesigned.  Byssinosis decreased drastically among textile mill workers.  The first paper by Hersh appeared in 1975 and was followed by many more (33 papers written with 28 others) through 1983. (25-28)

In the early 1980s, Sol was attracted to flocking issues.  A visiting scholar from the USSR, joined the School for a period of time and studied electrostatic flocking.  Papers were published in the US and in the USSR. (30-31)

Once the move to the new College of Textiles building in 1991, new labs opened in the area of textile protection and comfort.  The last papers and a book published by Sol were related to the design of protective clothing having a resistance to aerosols. (32-33)

Charles A. Cannon Professor of Textiles

Sol was named the first Charles A. Cannon Professor of Textiles in 1973.  He was honored at a luncheon hosted by officials of Cannon Mills. (29)

From the program notes:

Under the guiding hand of Charles A. Cannon for half a century, the words “Cannon towel” became a generic term and part of our language.
Sheets, bedspreads and other textiles for the home followed in an increasing cascade of style and color.  To the end that, today the fundamental direction that Charles A. Cannon gave to Cannon Mills has made the company a genuine pacesetter in styling, manufacturing, packaging and merchandising.
Significant Cannon firsts have included transparent packaging of over-the-counter items such as sheets, the use of color in household textile design, sheared terry towel surfaces to produce a velvet finish, no-iron sheets – and many others.
Cannon Mills was founded in 1887 by James W. Cannon, the father of Charles A. Cannon.  After his father’s death in 1921, Charles A. Cannon became president and principal executive of the company.  He remained actively involved in the company’s affairs until his death in 1971.
As the leader of the company’s enterprises, Charles A. Cannon directed the company to the point of being one of the world’s largest producers of household textiles, with 17 plants in three states, 24,000 employees and annual sales well above $300 million.
The name of Charles A. Cannon is now and always will be a monumental name in the American textile industry.  The North Carolina State University School of Textiles is honored to have a professorship bearing his name.

Cannon was the distinguished president of Cannon Mills Company, Kannapolis, NC and a 1940 recipient of an honorary doctorate of Textile Science.  Sol remained as the Cannon Professor until retirement in 1994 when he became Professor Emeritus.  The title was passed on to Subhash Batra in 1996 and to Moon Suh in 2008.

The College began a re-organization shortly after the arrival of Robert Barnhardt as dean in 1987.  The Textile Engineering and Science (TES) Department headed by Sol was formed on January 1, 1985, when the department of Textile Materials and Management separated into two departments, TES and Textile Materials and Technology (TMT).  In 1988, TES was incorporated into Textile Chemistry and the combination named Textile Engineering, Chemistry and Science (TECS) to reflect the recent creation of the Textile Engineering program.    Charles Livengood headed the new department.  Sol became Associate Dean for Graduate Studies. (4, pg. 190).

The reputation of the School of Textiles spread widely under the administration of Dean Malcolm Campbell who traveled extensively spreading the story.  He actively recruited students and faculty from around the world.  People like Sol Hersh were then invited to visit institutions around the world.

Sol was justifiably proud of the diverse funding sources.  Here is a list of sponsors:

Perhaps his greatest accomplishment in research was that which earned him the O. Max Gardner Award in 1979. The O. Max Gardner Award is considered the UNC system’s highest faculty honor. The UNC Board of Governors gives the award annually to “that member of the faculty of the University of North Carolina who, during the current scholastic year, has made the greatest contribution to the welfare of the human race.” (1) During the previous five years, Hersh and colleagues had conducted research on cotton dust and byssinosis under funding by Cotton Incorporated, the U.S. Department of Agriculture, and the National Institute for Occupational Safety and Health. (2) Byssinosis is a rare lung disease caused by inhalation of fine dust particles.  It is often called brown lung disease.  Hersh discovered that air washing was a quick purification treatment that drastically improved the health of cotton industry workers.

In addition to Sol’s outstanding research work, he was honored by NC State for Excellence in general.  In 1992, the University decided to establish a medal for excellence and name the medal after Alexander Quarles Holladay, the first chief executive of the college, which later developed into North Carolina State University. (4) Sol was the first faculty member selected.  The Medal recognizes career contributions of faculty members in teaching, research and service. Winners receive a medal and a framed certificate, and their names are inscribed on a plaque in the NC State Faculty Senate chambers. (5)

Sol retired in 1994.  He died on February 7, 2019. He was survived by Rosalie, his wife of 65 years, his children, Dr. Marla Hersh Schick, of Tampa, FL and Camille Lefkowitz (Ben) and 4 grandchildren. He was predeceased by his son-in-law, Martin Schick.
During his long and distinguished career, he published 119 papers in refereed journals and gave at least 111 oral presentations all over the world.  He was in demand everywhere from Europe, Israel, Canada, Japan, Australia, South America and Egypt, every continent except Antarctica.  He hosted visiting scholars from Israel, Japan, Korea, the USSR, and the People’s Republic of China. He was a member of the following Learned and Professional Societies: American Chemical Society, American Association of Textile Chemists and Colorists, Sigma Xi, The Fiber Society, Phi Psi Textile Fraternity, Electrostatics Society of America, International Institute for Conservation of Historic and Artistic Works, Air Pollution Control Society, American Association for Aerosol Research