A native of New Bedford, Massachusetts, Campbell graduated from Fairhaven High School in New Bedford in 1918, attended the New Bedford Textile Institute and graduated in 1922.  After working in four New Bedford cotton mills, he worked with Firestone Tire and Rubber Company, Akron, Ohio as a tire fabric inspector in 1923.   Clemson College hired him for three years 1923-5 as an Instructor and Assistant Professor in Textiles 1925-26.  Research work at Texas A. & M. College came next in 1926, where cotton fiber and spinning research work was done for the U.S. Department of Agriculture. (1)

Returning to Clemson, Campbell continued cotton research work where he was in charge of the U.S. Government laboratory there.  In 1930, he earned a B.S. from Clemson.  After 6 years at Clemson, he left in 1935 to go to Europe for research in six different countries.  During the time, he wrote three textbooks related to textile and yarn processing.  A transfer to Washington, D.C. came in 1936, where he served as Senior Cotton Technologist, in charge of the U.S. Cotton Research Laboratories (located in Washington, DC, Stoneville, Mississippi, Texas A. & M., College Station, Texas and Clemson College, Clemson, SC. (1)  In total, he worked with USDA from 1926-1943.

Campbell arrived in Raleigh as the new Dean of the School of Textiles in September 1943 after a short time (part of 1943) as Research Manager for the Textile Research Institute.  The North Carolina Textile Foundation called and made him an offer he could not refuse.  The School wanted a dean with broad academic and industrial experience.  Campbell fitted the bill perfectly. During the war there was not much that could be done to upgrade facilities and the number of students was rather small.  However, once the war ended, students poured in and facilities were quickly overcrowded.  Campbell set to work assessing what could be done and the Textile Foundation backed him up. (1)

A second trip to Europe was made in 1945, as a member of the Technical Intelligence Industrial Commission; he investigated textile education and research work in Germany.

In the spring of 1947, he sat down with one of the student editors of the Textile Forum and gave an honest inventory of accomplishments.  He had “found a handful of war-time students, a teaching staff with a good record behind them and a lot of textile machinery, good, bad, and junk.”  The Textile Foundation promised he could hire new help and gave him a slim budget.  With that he got to work and the Foundation backed him with money and support.  By spring of 1947, the Foundation had raised some $820,000 and the end of the war delivered an enrollment of 775 textile students – the largest of any of the U.S. textile schools.  The textile collection in the D.H. Hill library moved to the School in June 1945.  Three new faculty members were hired in 1946 and again in 1947.  A new addition to the building was proposed and soon would be underway. (2) Campbell was instrumental in the establishment of the Research Triangle Park and served on the Governor’s Research Triangle Development Committee. 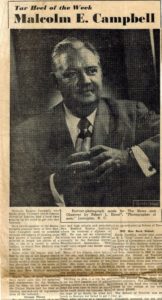 The degree Doctor Honoris Causa was awarded to Dean Campbell by the National University of Engineering, Lima, Peru for his leadership in the “Instituto Textil” Project.  This was the fourth honorary degree awarded to him.  He received: an MS from New Bedford Institute of Technology in 1956; Doctor of Textiles, Philadelphia Textile Institute in 1956; and Doctor of Textiles, Clemson College in 1957. (4)

Upon his retirement as Dean in 1967, he joined Roberts International as a senior member and director of their textile engineering and manufacturing international executive group. In September 1967, he headquartered in Bergamo, Italy to develop Roberts’ research and development activities. 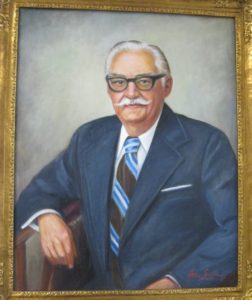 A portrait of the dean was unveiled in October 1977 and was hung in the Textiles Library.  The portrait was painted by Raleigh artist Mrs. H.A. Siddell.  That portrait now hangs in the Dean’s Corridor in the College of Textiles.

Head, Council of Textile School Deans 1946.
National Association of Cotton Manufacturer’s Medal 1922
Memberships in American Society for Testing Materials (Chairman of Raw Cotton Section); Textile Research Institute; Director and member of the Applied Research Institute; Member: American Association of Textile Technologists, the Governing Council of the Fiber Society; the Crown Tested Group of the American Viscose Corporation; the Society of Sigma Xi; and Delta Kappa Phi; Sigma Tau Sigma; Phi Kappa Phi.   He was a Mason.  He belonged to the Raleigh Lions Club and West Raleigh Rotary Club. He was included in Who’s Who in America, Who’s Who in Education and American Men of Science. (4)