Keith R. Beck was born in Morenci, MI, son of Russell and Elaine Beck.  From kindergarten, at age four, through the sixth grade, he attended a one-room country school.  He graduated as Salutatorian from Morenci High School.  He enrolled at Adrian College, Adrian, MI, where he received B.S. in Chemistry Summa Cum Laude with honors.  He entered Purdue University, West Lafayette, IN and graduated with a Ph. D. in Chemistry in 1970.  After a one-year post-doctoral appointment at Purdue, he joined Elmhurst College, Elmhurst, IL as Assistant Professor of Chemistry from 1970-1977.  He joined the Textile Science program at Purdue University from 1977-1986 where he was promoted to Associate Professor.  In 1986, he came to NC State and began a long and distinguished career as a teacher, graduate student mentor and administrator.

Upon moving to NC State, Dr. Beck became involved with Dr. Brent Smith and Dr. Ralph McGregor in their research to monitor and control the dyeing process.  These textile chemists were joined by Dr. Charles Spiekerman, a controls expert in Mechanical and Aerospace Engineering, and Dr. William Smith, a quality specialist in Industrial Engineering.  Later, Dr. Warren Jasper joined TECS and he became the controls expert in the project.  Initially, this group was part of a larger group of project that became known as CRAFTM (Consortium for Research in Apparel, Fiber and Textile Manufacturing).  A few large projects were funded by CRAFTM at NC State, and this effort eventually grew into the multi-university National Textile Center.  The team of Smith, Jasper, McGregor and Beck was called the Dye Applications Research Group (DARG).  Total funding for the dyebath monitoring and control research from 1998-2003 exceeded $2,000,000.  As funding decreased, Smith, Jasper and Beck formed HueMetrix, a start-up to commercialize the technology developed by the group.  HueMetrix further developed and commercialized the dyebath monitor and sold units to several major textile companies around the world.  The company closed its doors in 2015.

Student contributions to the dyebath monitoring research were significant.  This began when Tod Madderra joined the group in 1988.  Under the direction of Drs. Beck and Smith, he developed the first direct dyebath monitoring system, in which the dyebath was circulated through an opening in a probe so that spectroscopic measurements could be made.  The system was useful but suffered from three limitations.  Only dyes soluble in water could be measured.  The dynamic concentration range was limited by the pathlength in the probe.  Changes in pH, which are common in dyeing, may affect the absorbance of the dyes, making absorbance to concentration conversions very difficult.  At a professional meeting, where Dr. Beck was discussing near-infrared spectroscopy with Dr. Bill Hunter, the idea of applying flow injection analysis (FIA) to dyebath monitoring was raised.  Out of this conversation,  a project for Michele Lefeber (now Wallace) was created.  She developed the first system, FIA system which eliminated the three disadvantages of the direct dyebath monitoring system.  Eventually, she developed a hyphenated system which measured in real time reactive dye exhaustion by FIA and hydrolysis by HPLC. Using FIA technology, we monitored dyeings of cotton with reactive, direct and indigo dyes, nylon with acid dyes and polyester and acetate with disperse dyes.   Sara Lyerly (now Draper) developed sequential injection analysis and used it to monitor dyeing of cationic cotton with direct dyes,

With NTC funding, Dr. Beck and Perry Grady’s daughter, Lynn (now Moore), investigated supercritical carbon dioxide as a replacement for organic solvents in Soxhlet extraction of waxes from cotton. Extracts were derivitized and analyzed by gas chromatography.  In an EPA funded project with Dr. Gary Mock, Dr. Perry Grady and the late Dr. Manfred Wentz, Dr. Beck and Andy Monfalcone studied the effects of liquid carbon dioxide dry cleaning fluid on color fastness of disperse dyes on cellulose acetate.  In the early 2000’s, Dr. Beck was part of a large industry-funded project to develop dyeing with supercritical CO2.  Others involved in this project were Dr. Brent Smith, Mr. Cliff Seastrunk, Dr. Bo Hendrix and Dr. Gerardo Montero.  Initially, the solubility of several commercial disperse dyes (in presscake) was determined.  Using these data, an effective process for dyeing polyester was developed. The resulting polyester did not crock.  Earlier processes developed by other research groups had significant surface dye on the dyed polyester, leading to poor crockfastness.  The group also determined the solubility of various UV absorbers so they could be also applied with the process.  Funding was provided by Unifi, Ciba-Geigy and Praxair.  Even though the developed process was technically successful, the cost and size of the required high-pressure pumps and dyeing vessels inhibited commercial development.

Dr. Beck also developed a Near Infrared (NIR) spectroscopic method for rapid identification of fibers.  In a commercial application of their method, he and Janine Pedersen took the spectrophotometer to a spinning mill, which had inadvertently mixed some polyester in with cotton fiber.  They had several hundred large yarn packages, which needed to be sorted into groups.  Each package was brought in contact with the NIR probe and the instrument would classify it as “good” or “bad” (blended).

In 2010, under Dr. Hinks’ (now Dean Hinks) leadership, a Forensic Science program was being developed at NC State.  Funding for developing different aspects of a four  dye database was obtained from NSF and NIJ.  The tool to be used for forensic characterization of dyes was LC/MS and funding for carrying out the analytical work on other instruments on campus was included.  One morning, in the shower, Dr. Beck asked himself the question, “Why can’t we assemble the funds to purchase a LC/MS system so that we can do the characterization in-house”.  After a great deal of negotiating and hard work, the $263,000 necessary to purchase a slightly used Agilent LC/QTOF (quadrupole time-of-flight) system was accumulated.  For Dr. Beck, it was a dream come true.  Having started working with LC and MS 30 years earlier at Purdue, when a mass spectrometer filled a room and required a specialist to run it, Dr. Beck had an instrument system that sat on a table top and could be operated by an aging organic chemist.  It was like being a child in a sand box.  The instrument is still in use today.

Since his days in graduate school, when he packed his gas chromatographic columns in the stairwell of the Chemistry Building at Purdue, to his last three years at NC State, Dr. Beck was passionate about using instruments to solve problems.  A partial summary of these experiences was presented in, “Knob-Twiddling to Answer Questions about Textile Wet Processing Chemicals and Processes”, the paper given as his Olney Address.  He also thoroughly enjoyed teaching these techniques to hundreds of students throughout his career.

During an exploratory meeting with Special Agents at the North Carolina SBI, Dr. Beck mentioned his interest in LC/MS.  The Special Agent in Charge of Trace Evidence, offered that a LC/MS system had been purchased for the drug unit on the 4th floor of the SBI building, but they did not have the funds to hire an operator.  By that afternoon, the SAIC had received permission to move the instrument to the Trace Evidence labs.  Dr. Beck spent time in the lab getting the liquid chromatography to operate and developed a method to analyze dyes from fibers.  He taught the Special Agent responsible for fibers how to operate the system and she then wrote a document and obtained certification to use the technique on their forensic samples.

Dr. Beck has been active in AATCC since 1978.  Along with Dr. Jimmy Rodgers, he developed the RA 103 (Spectroscopic Technologies) Committee and currently serves as Secretary.  He and Dr. Rodgers are also editing the 4th Edition of Analytical Methods for a Textile Laboratory.

During his ten years as TECS Department Head, Dr. Beck was part of a major change in the departmental direction. When he arrived in 1986, his start-up package was an IBM AT and $2K for moving expenses.   In 1998, the first start-up package he offered as Department Head included $2,500 for moving expenses, two months of summer salary and support for one graduate student.  Ten years later, to be competitive in the academic market, the total for some packages had risen to more than $200,000.  A part of that large increase in start-up packages was due to the departmental desire to hire outstanding people.  Sometimes, that meant going outside the textile world and bringing in people who were willing to apply their considerable expertise to solving textile problems.  Of his 10 faculty hires, nine are still making significant contributions to the College, including six who have major administrative responsibilities.  Staff hires under Dr. Beck, were also important in advancing the mission of the department.  Birgit Andersen and Judy Elson contribute significantly to the daily operation of the department and to its mission.

After 43 years in academia, Dr. Beck now is enjoying seven-day weekends with his family and hobbies, including photography, woodworking, home brewing and model rockets.

Keith and Bev were married in 1968.  Brady was born in West Lafayette, IN just before they moved to Elmhurst.  Kelli was born two years later and five years after that, Kerri arrived.  Hayden and Weston are by Kelli and Carter and Grant are offspring from Kerri and Scott.  Shown below with Dr. Beck are his family (from the left, Kerri, Dr. Beck, Bev, Brady and Kelli) at the Olney Award ceremony in 2006. 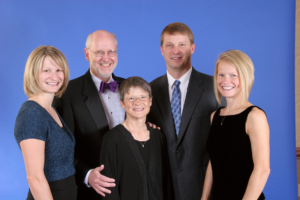 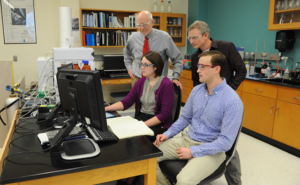 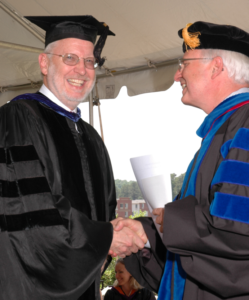