Elliot B. Grover was the first person hired by newly appointed Dean Malcolm Campbell.  The NC Textile Foundation hired Campbell in 1943 with the express purpose of upgrading the faculty by hiring experienced people who could “supplement the teaching with men who have specialized in conducting and supervising research work.” And further ‘to engage in extensive research in the manufacture of …cotton, wool, and hemp as well as all types of synthetic fibers and fabrics.’ (1)

Expansion of the School of Textiles

After World War II, the GI Bill enabled returning soldiers to finance their college education.   Enrollment expanded steadily from 318 in 1945-46 and peaked at 968 in 1948-49.  A steady decline followed, and by 1954-55, enrollment had shrunk to 477.  Worse than that, the incoming freshman class hit a low of 47, despite the fact that the textile industry was booming and desperately needed trained managers. (2, p101)

Short courses and conferences organized by the School of Textiles faculty have been offered since 1953.  These were held in places like Morehead City, NC and in Raleigh.  In addition to quality control offered by Dame Hamby, Grover offered a two- or three-week course for junior textile executives who weren’t textile college graduates. (2, p99)

The number of students enrolled in the mid-late 1950s did not justify the staff numbers.  The Chancellor made noises about cuts.  The industry needed employees.  With those two facts in mind, Dean Campbell and Grover decided to mount a recruiting effort.  Since neither of them had the time to go on the road to high schools, they hired William E. (Bill) Smith, a young instructor, to hit the road. (2, p102-3)

With a great deal of help from the industry, they divided the state into districts and worked with local industry and high schools to come into the schools and tell the story.  Enrollment grew dramatically.

The Federal government funded a project to send agriculture and textile professors to Peru to bolster their industries.  In the spring of 1954, Grover spent three weeks in a preliminary survey to assess the needs of the textile industry.  After returning, he completed his report, which became the framework for a multi-year contract that lasted until 1960. (2, p109-10)

Chancellor Caldwell pressed for a reduction in the 160 credits required for a BS degree.  The untimely death in 1961 of Ben Whittier, head of the Weaving Department, allowed Dame Hamby to suggest the combination of Weaving, Knitting and Design into one department, Textile Technology, headed by Grover.  The new credit requirements were set at 146. (2, p116-7)

In 1960, Professors Grover and Hamby wrote a Handbook for Textile Testing and Quality Control.  Both had worked closely with industry for over a decade including a Quality Audit Program.  They were convinced that quality was issue one in the industry.  A second edition was published in 1966. (3) 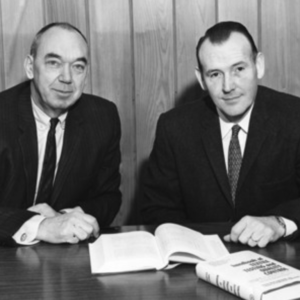 Elliot Grover was married to Marian Briggs.  They had two children, Elliot, Jr., (Little El) and a daughter, Jean.  They went every summer to a special retreat on Bass Lake in Michigan. (4)