Edwin Michael Holt, the father of textiles in Alamance County was born in 1807. His family resided in North Carolina for several generations after emigrating from Germany to Virginia and then to the Haw River area. Few of their farms were large enough to be called plantations and the land was certainly not the richest in the state. The families sought to be self­sufficient but were grateful to the English and the colonial government in New Bern. His great­grandfather Michael Holt I moved into the Alamance section of Orange County, Germans settled to the west and Scotch­Irish to the east of the Haw. He received a royal grant of 739 acres in 1759. When he died in 1767 he left his son, Michael II enough wealth to be part of the upper class. The regulators or poorer settlers struggled against the royals. The Battle of Alamance was fought in the spring of 1771 when Governor Tryon suppressed the uprising. Michael II was on the side of the governor and was badly beaten up in the Orange County Courthouse. Later, in 1775, he decided to lead troops in support of the royals in putting down the beginnings of dissent that led to the American Revolution. However, he disbanded his troops and returned home. Holt remained neutral in the war and later was able to buy 380 acres from the new state of North Carolina.

The third Michael, known as Michael III, was born in 1778. He became one of the wealthiest men and one of the largest slave holders in the North Carolina Piedmont. Edwin Michael was born (1807) into what many today would consider aristocracy but his upbringing and education were not patrician. He regularly worked the land and drove wagons, as early as age 14, 100 miles to Fayetteville over poor roads to take plantation goods to market. Despite the agrarian beginnings, the Holts were thinking about an industrial economy. In 1813, when Edwin Michael was only six, his father joined a group of wealthy men from Orange County “for the purpose of establishing a COTTON and WOOLEN Factory in the town of Hillsborough or its vicinity.” The mill was planned as an economic weapon to be used against the British during the War of 1812, never materialized. That same year, however, Michael Schenck successfully built the first North Carolina cotton mill in Lincolnton, some 100 miles south and west of Alamance County.

Edwin Michael married Emily Parish in 1828 and moved into a small house across the road from his parent’s home. He ran the plantation, which now totaled 1,200 acres and 19 slaves. Children arrived with regularity: Alfred Augustus (1829); Thomas Michael (1831); James Henry (1833); Alexander (1835); a daughter Frances Ann (1837); William Edwin (1839); Lynn Banks (1842); Mary Elizabeth (1844); Emma Virginia (1847); and Lawrence Shackleford (1851). In 1837, after discussions with Charles Danforth of New Jersey and Henry Humphries of Greensboro, Edwin Michael decided to build a cotton factory and locate it on the Alamance Creek. He traveled by steamer north to New York City and then went overland some 14 miles to Paterson, New Jersey. He bought spinning frames and arranges for a mechanic to install and run the equipment. He contracted with Thomas Ruffin, whose plantation was on the edge of the state’s cotton belt, to furnish most of the cotton needed. The Alamance Cotton Factory began successful partnership with his brother­in­law William Carrigan.

The original factory was a frame building with a brick foundation, was illuminated with whale oil lamps and heated by wood­burning stoves. Yarn was packed in five­pound bundles and sold locally in the Holt store, commissioned to peddlers, or taken cross­country for sale. In 1845 power looms were added and the factory began producing cloth for sale. By the mid­1840’s, Holt turned over the daily management to trainees and he began traveling to explore business opportunities. He considered other mill opportunities with Frances Fries, but that never materialized. He visited Cedar Falls, Randolph County and declined an offer to buy it from Benjamin Elliot for $28,000. He looked at a site near Lexington. Finally in 1857, during a national recession, Holt acquired the bankrupt Cane Creek Factory from the Trolingers, which he turned over to his son, Thomas, in 1860. The factory was renamed Granite because it was built on an outcropping of granite along the Haw River where the North Carolina Railroad crossed. It was this son who first began producing the dyed cloth known as Alamance plaids that proved to be extremely popular in the Philadelphia market and gave the Holts a national reputation. Later Thomas recalled the situation and how it came about:

“In the year 1853 there came to our place of business on Alamance Creek a Frenchman, who was a dyer, and who was “hard up” and out of money and without friends. He proposed to teach me how to color cotton yarn if I would pay him the sum of one hundred dollars and give him his board. I persuaded my father to allow me to accept this proposition, and immediately went to work with such appliances as we could scrape up, which were an eighty­gallon copper boiler (which my grandfather used for the purpose of boiling potatoes and turnips for his hogs), and a large cast­iron wash­pot which happened to be in the store on sale at the time. With these implements I learned my ABC’s in dyeing.” 2

He also found herbs and flowers in the woods to use with indigo to dye his plaids. By the fall of 1853, the Holts had constructed a dye house adjacent to the Alamance Cotton Factory. Thomas Holt stated: “The Frenchman remained with me until I thought I could manage the dyeing myself. I got along very well, with the exception of dyeing indigo blue. Afterward, an expert dyer in blue came out from Philadelphia who taught me in the dyeing of that color. He then put two Negroes to work with me, and side­by-side I worked with them at the dye tubs for over eight years.” 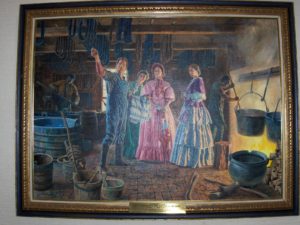 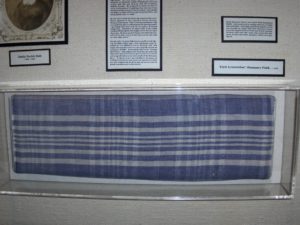 Shortly after Thomas Holt became proficient in dyeing colorfast indigo yarn, four box­looms were installed at the Alamance Cotton Factory, and thus began the manufacture of a class of goods known as “Alamance Plaids”. Concerning this event, Thomas Holt wrote: “I am reliably informed that up until that time where had never been a yard of plaid or colored cotton goods woven on a loom south of the Potomac River. If this be true, I am entitled to the honor of having dyed with my own hands and had woven under my own supervision the first yard of cotton colored goods manufactured in the South.” 3 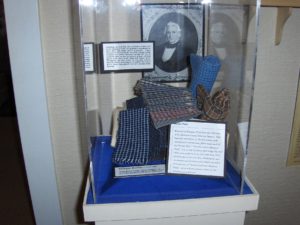