“In 1921 the publication Commerce and Finance was so impressed with the remarkable growth of the textile industry, that they were led to ask who had been the leaders in this very important development; and being unable to answer the question to their own satisfaction, they determined to take the opinions of those whose knowledge of the subject was more complete than their own.  They therefore addressed a questionnaire to at least one officer of every important cotton manufacturing concern in the South, asking him to consult with his principle officers and designate the six men, living or dead, who in their opinion were best entitled to be considered as leaders by virtue of what they had done – or were doing – not only for their own enterprises, but for the interests of the southern textile industry as a whole.  They included the dead as well as the living because they realized that the marvelous growth of the cotton industry in the South was largely due to the vision and self-sacrificing enthusiasm of the many men who, like Moses, were taken away before they could enter the Promised Land to whom they led their followers, and the publication was to pay tribute to them, as well as to the leaders who are still in the flesh.”

“As a result of the ballot, the following leaders in the industry –some deceased- were nominated for the honor:

The lives of some of these great men are covered by separate web pages based on the biographies writtenby William Plumer Jacobs.

A century ago, if you were to ask anyone in Burlington, Alamance County, NC the name of the most famous or most influential person or family in the county or in the state for that matter, you would undoubtedly be told “E.M. Holt” or “The Holt Family.”  From 1837 to 1900, the family founded, bought or partnered with others to operate over 20 textile mills.  The first factory-dyed yarn south of the Potomac River led to the development of “Alamance Plaids” – famous throughout the United States. This was a monumental accomplishment in the development of the textile industry in North Carolina and in the area surrounding Burlington.  However, the family just sort of fell apart and lost interest in the mills.  The grandchildren of E.M. Holt “who had run the old plaid cotton mills.  And they had let them go down. …A lot of them closed, some of them bankrupt, the others just took their money and got out and quit,” Reid Maynard, a prominent hosiery manufacturer in Alamance County in the mid-20th century.  Today, hardly anyone remembers the impact this family had. … They just gave them (the mills) up.”  That was the day Spencer Love came to town.

If you were to ask the same question in the late 20th century, you probably would be told “Spencer Love” or “Burlington Industries.”  Love came to town by way of Cambridge, MA and Gastonia, NC.  This was no Yankee carpetbagger come south.  Love’s family history is reminiscent of the Holts.  The Loves were Scotch-Irish Presbyterians, who migrated into the North Carolina Piedmont about the time the Holts came south, however, they moved into Gaston County, west of Charlotte.  The Loves and the Rhynes were active textile men.  Love’s father, Lee, was more attracted to teaching and left the family business to teach math at Harvard University.  After 20 years, he returned to North Carolina and began investing in textile businesses.  His son, Spencer grew up in Cambridge but returned often to Gaston County during his youth.  After army service in World War I, Spencer at age 27 “Came home and worked to get in the textile business.  In 1919, he joined relatives at the Gastonia Cotton Manufacturing Company (1887). Spencer became paymaster.   Seven months later, he and his father bought the run down mill and took the plunge as mill owners.  With run-down totally out of date equipment, it soon became clear that things had to change. In 1923, Spencer, the Secretary-Treasurer, gave up and looked elsewhere to apply his business training.  The town of Burlington called.

Burlington was looking for a knight on a white horse to come to town and pick up the pieces left behind as the Holt family lost interest in the textile mills.  The town fathers offered a $250,000 loan underwritten by the Chamber of Commerce.   In 1924, after liquidating the Gastonia Cotton Manufacturing Company, Spencer moved the best of his remaining equipment to Burlington and started over. Rayon was a new fiber – they called it artificial silk and Spencer hung his hat on the fiber.  And began making bedspreads..  Success!  A second mill opened in 1926 and by 1929, Burlington Mills had a New York sales office.  He had arrived.

Opportunities came right and left and even during the Depression, Burlington grew.  In 1937, he incorporated 22 plants into Burlington Mills Corporation (in 1955 the name changed to Burlington Industries).  The diversification was incredible: ribbons, hosiery, carpets, and fabrics of all sorts.

On January 20, 1962, Love died at age 65 in Palm Beach, Fla.  Burlington Industries was the largest textile company in the world, and the 48th largest U.S. corporation – one that operated in 18 states and 7 foreign countries. 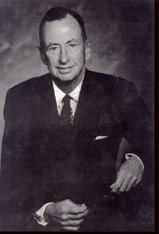 After consulting with readers and scholars, Business North Carolina published a list of the 20 most-influential business figures in the history of North Carolina. The individuals selected were tagged the titans of 20th-century Tar Heel business. James Spencer Love was ranked first on the list. Quoting from the March 1999 issue of Business North Carolina: Love was responsible for “an unparalleled textile corporation in the creation of Burlington Industries.” While others continued to rely on commission houses to move their merchandise, Love opened his own New York sales office to create a brand that both the domestic and international markets would demand. He was a fierce competitor, taking awesome risks, diversifying, investing heavily in new technology and new methods to make his mills more efficient and productive — all to keep a half step ahead of a pack in a business that was constantly changing.

50.  Peter Leijdekkers, (1920 –   )– Stork Brabant, Boxmeer,Netherlands.  Along with Peter Zimmer, a competitor, was one of two leaders instrumental in the development of rotary screen printing.

35.  Frederick B. Dent, chairman and treasurer, Mayfair Mills. Served as President of SCTMA, ATM.  Active in US governmental trade positions.

32.  Catherine Evans Whitener (1880-1964) “Mother of the Carpet Industry” In 1895, her bedspread made with the hand-tufting technique known as “candlewick embroidery” spurred a cottage industry that led to the use of tufting to manufacture carpet.

28.  Robert C. Jackson, (  – 2008) first ATMI leader.  Helped build the framework for the national trade association that gave voice to the US textile industry in dealing with federal government issues.

24.  William A. Klopman, former chairman and CEO, Burlington Industries. Hired in 1946, rose through the ranks and became CEO in 1976. Active in many organizations. Spurred Gov. Hunt of NC to support textile education.

23.  J. Nicholas Hahn, former president and CEO, Cotton Incorporated.  During his tenure, cotton rose from 34% to nearly 60% of the content of apparel and home furnishing fabrics.

20.  Morris M. Bryan, Jr. (1919-1984) Jefferson Mills, textile visionary. Believed in better education, modernization and development of overseas markets.  Inventor and “tinkerer”, he had scores of patents and lost an arm working on a textile machine.

19.  Erwin Pfarrwaller (1911-1993) Austrian who became the “Father of Projectile Weaving Machine” Worked on developments that led to the introduction of the Sulzer projectile machine in 1950 that became an international standard.

11.  Spencer Love (1896-1962), founder, chairman and president, Burlington Industries. Burlington became the largest US textile company and included plants in other countries. Active in many government and educational institutions.

6.  Dan Frierson, chairman & CEO, The Dixie Group   At age 57, he may have held the top elected post in more textile associations than anyone in history.  TW Leader of the Year 1988.

5.  Charles A. (Chuck) Hayes, ( 1934- 2002) chairman Guilford Mills.  One of the most gregarious personalities in the US textile industry.  Guided Guilford from $3 million to $900 million operation in warp knitting.

1.  Roger Milliken. (1915-2010) Twice named Textile World Leader of the Year (1990 and 1999).  Innovator and award recipient.  Deering Milliken and then Milliken & Co. grew to be the largest US textile company.   Responsible for “Crafted With Pride in USA Council.” Grandson of Seth M. Milliken, Founder of Deering, Milliken & Co.