A mill engineer without equal in the late 19th and early 20th century, Stuart W. Cramer was responsible for the design of 150 mills -nearly one-third of the textile mills built in the South during that period.  A native of Thomasville, NC, a town tucked away in the Piedmont far from the ocean, the family with little financial resources to send a son to college, arranged for an appointment to Annapolis. Cramer graduated as a naval engineer from the US Naval Academy at Annapolis.   At age 20 in 1888, fresh from that program, he elected to study mining engineering at Columbia in New York City.  He was appointed chief assayer at the United States Mint in Charlotte, where he worked for four years analyzing gold and silver ores.  What an unusual preparation for a textile mill engineer! 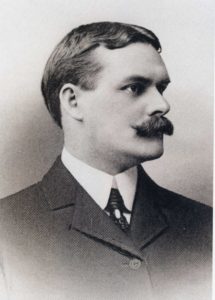 During this time in Charlotte, you might say he was discovered by D.A. Tompkins, the leading textile mill engineer of the 1890s.  Tompkins’ firm in Charlotte represented the Westinghouse electric motor and several textile mill supply companies.  He provided engineering services and designed mills.  He was an enthusiastic campaigner for higher textile education and was instrumental in helping form the programs at Clemson, North Carolina State, Mississippi State and in Texas.  After serving a two-year apprenticeship with Tompkins, Cramer formed his own company in the mid-1890s and began designing and building cotton textile mills.  Fortunately, he was a dedicated observer and writer.  His early work on the Highland Park Mill #3 in Charlotte was the basis for his four-volume “Useful Information for Cotton Manufacturers.”  The second 1909 edition of these detailed and extensive volumes is available in e-book format thanks to the digitizing services of the 21st century.  He was the designer and supplier for the Tucapau Mill, Spartanburg County, SC and the Pelzer Manufacturing Co., Pelzer, SC, to name just two of the eleven cotton mills he formed. (Thank you Peter Metzke!) 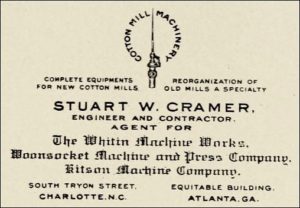 He also was a talented inventor and achieved over 60 US and international patents involving various aspects of textile manufacturing.  He is credited with the term “air-conditioning.”  Air-conditioning was widely installed in cotton spinning plants to increase spinning efficiencies (and you thought it was for creature comfort!).  No, early on, spinners realized that yarn could be spun with fewer breaks if the air was humid.  Hydrogen bonding gave cotton fibers greater strength and allowed higher spinning efficiencies.

Working with D.A. Tompkins and the Westinghouse Electric Company, he joined with James B. Duke of the famous tobacco family to establish Duke Power Company.  He encouraged the widespread installation of electric drive motors to replace waterpower and Corliss steam engines as the power supplies to run mills.   Electric lighting enabled mills to work around the clock.

His crowning achievement was the affiliation with the Mayes Manufacturing Company in Gaston County along the south fork of the Catawba River.  The Southern Railroad ran directly through the property and connected Charlotte with Atlanta and all points in between along the Piedmont.  River and railroad provide an unbeatable situation: water for mill processes and ready shipping of raw cotton in and finished product out.  Eventually, he bought a controlling interest and began putting his unique stamp on the mill and the mill village, which later became known as Cramerton and Cramerton Mills.  Cramerton was an ideal village with all the comforts known at that time: electricity, indoor plumbing, and kerosene-heated water heaters. 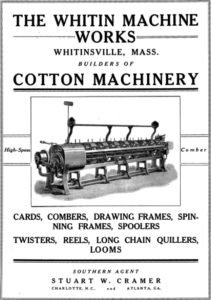 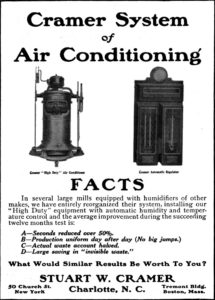 In 1918 Mr. Cramer terminated his activity in the field of air conditioning and sold his entire business to the G. M. Parks Company of Fitchburg, MA.  A new company, Parks-Cramer, was formed with offices in Fitchburg, Boston and Charlotte. The Parks-Cramer Company Complex was located on South Boulevard, in Charlotte, Mecklenburg County, North Carolina. in the Dilworth neighborhood.  (Parks-Cramer 1925) (Parks-Cramer web)

Figure:  Cramer Mountain 1955.  Maymont can only be imagined as the crowning star on the mountain behind the trees.  Image: Chris Bell 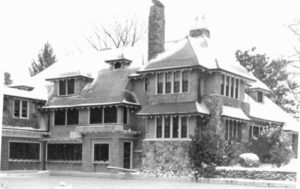 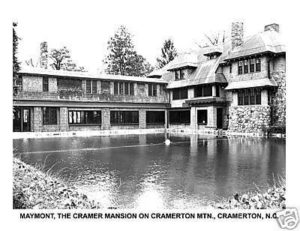 His summer home, Maymont,  was constructed on a mountain to the south now know as Cramer Mountain.  www.cmhoa.com/history.aspx  The property went into foreclosure in 2012. (Gaston Gazette)

His leadership was recognized by North Carolina State College when he was awarded the honorary Doctor of Science degree in 1929. (Hart, Thomas R. 1955)

Stuart W. Cramer died in 1940 at the age of 72 and is buried in Charlotte.  In 1948, his family endowed The Shuttle Inn and The Cramer Room at the newly expanded School of Textiles at North Carolina State College.  The Cramer Room provided a place for faculty and staff to gather and share experiences over a cup of coffee next to the famous snack bar and hot grill called the Shuttle Inn.  When a new College of Textiles building was built on Centennial Campus in 1991, The Cramer Room and The Shuttle Inn also moved to Centennial Campus, where faculty, staff, and students still gather over a cup of coffee.