A Textile Family Comes to America –
The Wiegand Family of Greiz, Thuringia, Germany

The village of Greiz, Thuringia has been an established settlement since at least 1209. For many years, this village in southeastern Germany was the home of the Wiegand family; many were in the textile business. Johann Wiegand (1744­1805) was a Guild Master Weaver, as was his son, Carl (1784­1854), his son Karl (1821­1890), his son Franz (1858­1931), and his son Gerhard (1889­1978). Guilds were one way that the artisans of those days could control the quality of the product as well as control who could and who could not enter the textile business. Gerhard, at age 15, graduated the public school system in 1904 and was 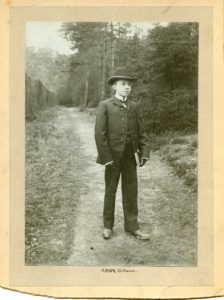 apprenticed as a clerk without pay for three years to learn the woolen trade but not the weaving aspect. He was taught bookkeeping, accounting, calculation, correspondence, and how to pack parcels, bales, wooden boxes for shipment. He also learned to examine woolen goods for finish and shipping for foreign markets. He worked 7 AM to 7 PM. He also attended a special trade school for these years. In 1907 he had “learned out” or completed his apprenticeship and was paid 50 German Marks. For recreation he attended the Turverein, a combination athletic and social club. He began attending dance school and met his future wife, Margarethe Clauss.

He also worked in Leipzig for two years from 1908 – 1910 for Herman Samson, an establishment in the old famous Messe (Fairgrounds) Leipzig with about 150 clerks. He earned about $30 per month. There he worked in the buying department and learned colors. 1 He left for Gera in 1910 and worked for another woolen mill. He was in the military reserve and completed his service in 1912. He was free to explore options outside Germany. 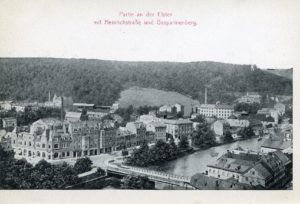 In northeastern New Jersey, cities such as Patterson and Passaic grew into industrial powerhouses in the 19th century. Water from the Passaic River and the falls on the Passaic, powered the early textile mills and gave opportunities for machinery manufacturers and the forges needed for ironwork. Textile imports were heavily taxed in the late 1900s, so many foreign firms decided to locate production plants in the US. Passaic welcomed these firms and was close to New York. Botany Worsted Mills was founded in Passaic in 1889, and soon were affiliated with the Forstmann Woolen Mills, founded in 1904 by German immigrants, notably Julius Forstmann, age 33.who arrived from the Ruhr at age 33. As the mills grew, talent was continually sought locally and from abroad. By 1910, Passaic had become known as the “City of Immigrants,” and by 1920, the Polish population alone totaled 17,000. Other nationalities included Ukrainians and Italians, but the largest group was from the Austrian region of Galicia. At the peak of wartime production in 1918, 10,000 of 21,000 workers in Passaic worked in the Botany and Forstmann plants, both German­owned mills. 2

Gerhard Wiegand heard of the opportunities available in America and answered the call of American Graupner in 1912 for a two­year contract to assist with the start of a mill by Forstmann­Huffmann. Gerhard arrived in Hoboken, New Jersey on September 29, 1912 aboard the Lloyd steamer George Washington from Bremerhafen, Germany. He was met by old friends from Greiz and taken to Passaic. He found a boarding house with meals for $8.00 per week but was only going to make $10. Passaic was not the prettiest place, as Gerhard recorded, “In the beginning, I was very much disappointed about the dirt and shabbiness of the town, which did not compare at all with the nice clean German cities, but I had to get used to it.”

Eventually he became a color designer and sample department head, and sent samples and colors to prospective buyers of Forstmann Woolens.1, 3

Unable to return to Germany because of the war, after four and a half years separation, he sent for his fiancée, Margarethe Clauss, who left Rotterdam, Holland on the steamer New Amsterdam and after almost a month on the sea arrived here on January 2, 1917. This was the last ship permitted to sail before the US openly entered the war. 1 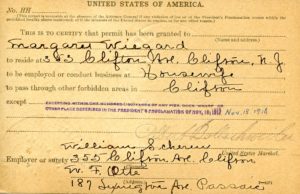 “She had to travel alone under war conditions from Greiz to Holland and then by steamer over the ocean…At that time there was the greatest danger on account of submarines and USA about to enter the first world war.” So I met her on the pier in Hoboken and this was a wonderful “wiedersehen” after 4 1/2 years of separation. I took (her) to the best German restaurant there, we ordered dinner and when it was served, we could not eat, too much excited. On January 13th, 1917, we got married at our Pastor Lemke’s house. We started house with one bedroom, kitchen and dining room and $1000 debts, the money was loaned to us by Mr. Graupner.” At that time my salary was $25 per week. The first child, Ilse was born in May 1918. We were also very lucky because shortly before I received a bonus at the mill and that paid for the doctor and the hospital.”

By this time Mr. Forstmann and Graupner separated and Mr. Forstmann demanded of me to be loyal to either him or Mr. Graupner and I decided for Mr. Forstmann as Graupner advised me to do so. I told Mr. Forstmann about my $1000 debt and I see him today yet, how he was pleased about my telling him and how he wrote out a voucher for our cashier to give me that sum of money to repay my debt that same day, which I did and a little later I repayed (sic) Forstmann. Now we were free, but not for long.”

October 1921 Frederick was born and then I bought our first house… again with borrowed money. Still April 1922 we went home to Germany stayed there for two months and came back with empty pockets, starting all over again. From then our financial situation improved considerably and I was able to repay my mortgage. ” (Note: Gerhard’s mother died during the war, literally of starvation. Poor food and no medicines. Times were very hard in Germany after the war. He must have left all the money he could with his father).

“Also in 1922 I bought our first car. A 4 cylinder Oldsmobile. So I went to work by bicycle and did so after to save the car. We had then good and sometimes lesse good living, but our good Lord was with us through health and sickness.  1926 I was transferred from the mill in Passaic to our New York sales office and commuted between Clifton and New York.” 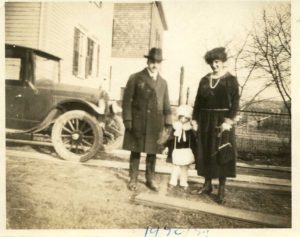 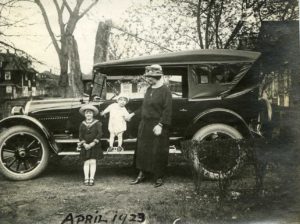 The Wiegand home frequently had collections of feathers, stones, butterflies or whatever had color as Gerhard sought inspiration for new fashion color for the Forstmann fabrics. “1937 economics began to improve. From 1912 to 1939 my chief Julius Forstmann insisted that I stay always right next to him from morning to night. I knew all of our thousands of fabrics and had such a good knowledge of our whole business. For years I was away from home for 13 hours daily and so many Saturdays I had to be in the N. Y. Office, too. Now I wonder would someone of your generation do this now?” (Italics mine) 1938 Mr Forstmann started to get ill and he died in 1939, again bringing on changes. My whole department was brought back to the Mill in Passaic, where I was to be assistant to our new president Curt Forstmann. Under him my business life began to get easyer (sic)­ but not for long… 1939­1941. The Second World War broke out and changed the world which was still shaking from the 1st one.” 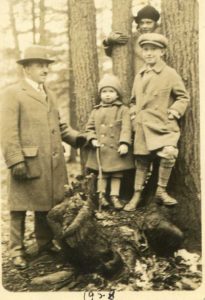 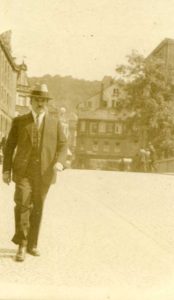 One offspring, Frederick Wiegand, broke the textile chain, entered Yale University in 1939 in pre­medicine and became a medical doctor. He served during World War II as a Navy doctor and completed his career at Wake Medical Center, Raleigh as Head of the OB/GYN teaching service for the UNC ­ Chapel Hill hospitals. He attained the rank of Associate Professor, a glass ceiling for those not active in publishing journal articles (comment by Gary Mock). 1

A Stroll through the Textile History of Greiz

Abstracted from a brochure published by the Town of Greiz. 2008