One of the South’s true success stories in this era was the founding of several mills that eventually developed some of the finest dress fabrics and the best military khaki fabrics for Galey & Lord and Burlington Industries. The initial goal in 1906 was the founding of Mayes Manufacturing to produce fine combed cotton yarn. A site was selected on the main line of the Southern Railway along the banks of the South Fork River, between Belmont and Gastonia. J. H. Mayes, an independent architect and engineer of cotton mills and later agent for Easton & Burnham Machine Co., Pawtucket, Rhode Island became the first president and manager. The first building was a one­story brick building, 150 x 325 feet, for the Whitin spinning equipment. Southern Power Company 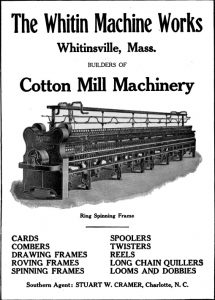 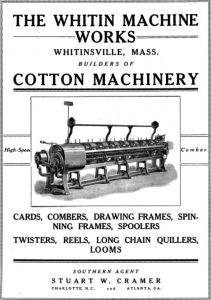 supplied electricity. In 1907, they formed a selling alliance with Galey & Lord. A mill village was built for the workers and named Maysworth. A major change occurred when one of the owners, Thomas E. Moore, passed away in 1913 and Stuart W. Cramer and associates of Charlotte bought the interest. Cramer invested money and gained controlling interest. In 1915, the name of the company was changed to Mays (the spelling changed from Mayes to Mays) Mills, Inc. with Cramer as president. 1 He built Maymont, a beautiful home that overlooked the valley. 2

From 1915 to 1925, the area flourished and in 1922, at the persuasion of friends, the town name became Cramerton, a model mill village with paved streets, concrete sidewalks, and houses with all modern conveniences including indoor plumbing. Mill no. 2 was announced in 1916. The company name was changed in 1922 to Cramerton Mills, Inc. Textile World magazine gushed “ engrossed in the business of town­ building … is the accomplishment of this corporation” The next phase of expansion was to build a weave mill and finishing plant. The complete package from bale opening to finished fabric all in one location was achieved. Mayflower Mills opened in 1924 with 500 Crompton & Knowles looms. 1 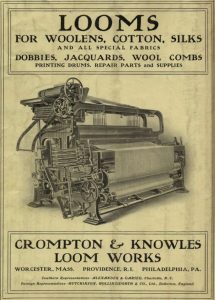 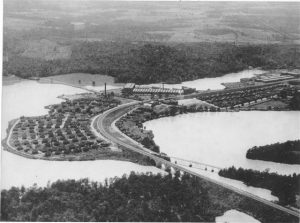 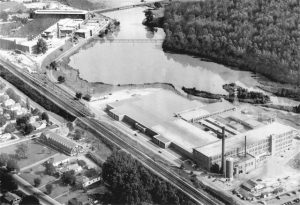 The products of the new Mayflower cloth mill, using yarns from the Mays spinning mills, were organdies, shirting and other fine and fancy colored cotton, wool and rayon goods, plain and mercerized. The finished goods carried the trade name “Felicien” and were marketed by Galey & Lord. A strong relationship developed between the producer and marketer. Stuart W. Cramer believed in bringing the best management he could find. One of the earliest to join (1908, right out of school) was C. C. Dawson, a graduate of the B.S. Textile Industries program at NC State. Dawson rose through the ranks and eventually was general manager of the Cramerton Mills. 1

The company first manufactured Cramerton’s famous 8.2­ounce “Army khaki” in 1929. There is no doubt that his son, Major Stuart W. Cramer, Jr., an officer in the US Army strongly influenced the decision to develop an improved fabric for military uniforms. It became the staple of the U. S. military in World War II and was worn by millions of soldiers throughout the world. At the beginning of the war, Cramer voluntarily released the technical know­how to allow other producers to duplicate his fabric. Today the famous name has been registered and reintroduced by Dockers as “Cramerton khaki”. 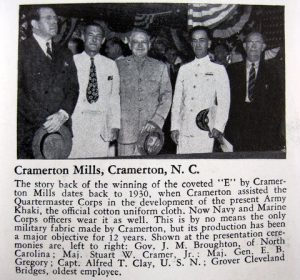 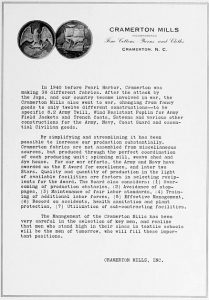 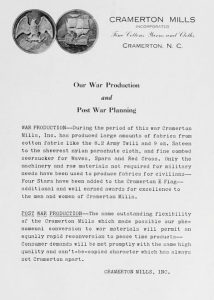 In 1946, a year after the war ended, Cramerton Mills, Inc., with facilities containing 375,000 square feet of manufacturing space, had 60,000 spindles, 1,000 looms, and a major finishing plant. The entire complex was sold to Burlington Mills Corporation for a reported $12.5 million – a huge amount of money in that day. The three plants eventually became plants in the Galey & Lord Division of Burlington. In the 1960s, a new plant was built for dyeing and finishing and was called the W. G. Lord Plant or the Lakewood Plant. New facilities were certainly important for the proper dyeing and finishing of the Dacron polyester then being incorporated with cotton to make permanent press fabrics. 1

The Mays plant was closed in 1975 and leveled in 1977. In January 1978, the decision was made to close Mayflower and W. G. Lord. The Lakewood facility became part of the Knitted Fabric Division. That too was closed in 1999.