Whiteness and blackness are experiences of perceptions by humans. Similar to all perceptual experiences they are subjective and depend strongly on illumination, surround and a number of other perceptual phenomena.

Black materials are major components of many commercial products. Thus a systematic investigation of the perceived blackness and establishment of a relationship between perceived experience and measured quantities is beneficial. Due to the low signal to noise ratio the determination of the degree of variability in measurement of black materials is also necessary.

In 1980, W.D. Wright highlighted the lack of research into blackness in an article published in Die Farbe (Wright, 1980). At that time, some work was conducted by a group of German scientists to formulate an index of blackness specifically for use with black pigments (Bode, et al., 1979; Ferch, et al., 1981; Gläser, 1978; Lippok-Lohmer, 1986). These early models, however, are not applicable to systems other than soot-based pigments in inks and print pastes. 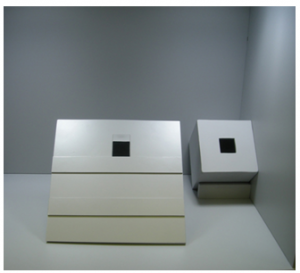 Figure 1. Samples used in the development of a visual black dataset, NCSU-BK

Induced blackness has also been studied by Shinomori et. al. (1994); Volbrecht et. al. (1989a, 1989b, 1990); and Werner et. al. (1984). The induction studies indicate potential neurophysiological mechanisms for the perception of blackness.

Initial experiments in our group focused on identifying the role of hue in the perception of blackness, while later experiments provided data for the generation and testing of an initial index. We have also carried out a series of measurements to determine the inherent variability in the measurement of near-black objects.

A comprehensive visual dataset comprising nearly black objects with varying hue and chromaticity attributes has been developed. Sample comprising the dataset are shown in Figure 1. 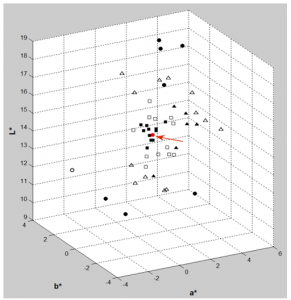 The dataset was used to examine the performance of various color difference equations in the ‘black’ region of the CIELAB color space.

Figure 2 shows a range of black objects including Munsell samples, as well as printed and dyed textile materials that were used to assess the role of hue and chroma on preferred blackness.

In the textile, paper and plastic industries, white materials are commonly employed for many aesthetic and technical applications. Due to their high lightness and achromatic nature white materials are also very important to provide the necessary base for dyeing, printing and finishing. Most textile materials, however, are polymers containing natural colorants which affect their appearance. Two common approaches are used to improve the whiteness of textile materials: chemical bleaching and fluorescent whitening.

The degree of whiteness of objects is commonly measured with an index of whiteness. By the1990’s more than 100 different whiteness indices were known to exist. However, the equations developed were only as good as:

The Commission Internationale de l’Eclairage (CIE) recognized the importance of a unified approach to whiteness measurement; hence, the CIE developed and now recommends one formula, known as the CIE Whiteness Index (CIE WI). A tint index for evaluating the hue direction of white objects was also established. This formula is recommended by textile associations such as the American Association of Textile Chemists and Colorists (AATCC), and is used widely today.

However, although convenient, the CIE WI values do not correlate well with the human perception of whiteness, particularly for the fluorescent white materials. The problems are not necessarily due to errors in the formula, but may be due to one or more critical variables that currently are not adequately controlled. These variables include:

As the points above infer our current research aims to address several objectives: