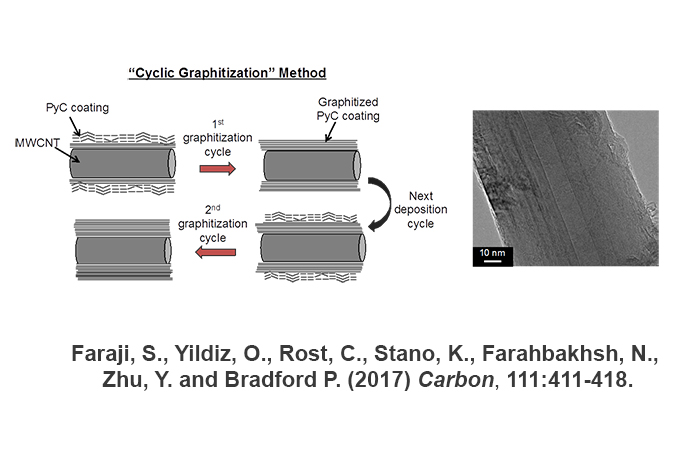 Carbon coated aligned multi-walled carbon nanotube (AMWCNT/C) sheets were used for studying the
controlled radial growth of MWCNTs. Pyrolytic carbon (PyC) was deposited on the surface of nanotubes
using multiple cycles of chemical vapor infiltration. Morphological and structural characterization
showed that when graphitization was done in one step, after the deposition of multiple cycles of PyC, the
presence of a large amount of disordered carbon on the surface of nanotubes led to a poorly graphitized
coating structure that did not resembled nanotube walls anymore. Graphitization of the AMWCNT/C
sheets after each deposition cycle prevented the development of disordered carbon during the subsequent
PyC deposition cycles. Using the cyclic-graphitization method, thick PyC coating layers were
successfully graphitized into a crystalline structure that could not be differentiated from the original
nanotube walls. TEM observation and X-ray data confirmed radial growth of nanotubes, while spectra
collected from Raman spectroscopy revealed that radially grown CNTs had the same quality as graphitized
pristine nanotubes. The focus of this study was to compare the effect of cyclic graphitization with a
one-step graphitization method to gain insight on the necessary parameters needed to radially grow
high quality CNTs. Read the full article here.