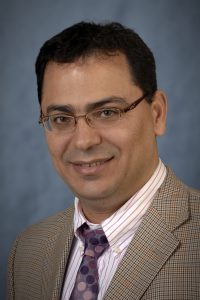 Research Paradigms in El-Shafei’s Group can be divided into five main thrusts:

1. Dye-sensitized Solar Cells (DSSCs)
In the wake of the Fukushima Daiichi and Fukushima Daini Nuclear Plants disasters in Japan in March 2011 coupled with the problems associated with nuclear waste storage and radiation leaks, the world’s needs for clean and safe energy is growing more rapidly than ever before.

Solar energy is one of the cleanest and most renewable energy sources we receive on the planet Earth.  Yet, we are not taking full advantage of this abundant natural gift. Hence, harnessing the solar energy should be at the forefront of Research and Developments for clean and renewable energy sources in the USA.  It has been estimated that only 5 minutes of solar irradiation onto the surface of the planet Earth is equivalent to the total energy consumption by humans in one year. Compared to silicon solar cell technology, which is expensive due to its manufacturing cost, Dye-sensitized solar cells (DSSCs) have been attracting more academic and commercial interests because of their superior performance under low lighting conditions, low cost, and independence of incident light angle.  For example, DSSCs work from sunrise until sunset even in a rainy and/or cloudy day more efficiently than silicon PV. They also work more efficiently in ambient light, which makes them a unique class of photovoltaic devices.

The principle components of DSCCs, which were invented by Michael Graetzel in 1991, are a sensitizer (a dye or a pigment), an electrolyte (I-/I3-), and a semiconductor (TiO2) in the nanocrystalline form. The sensitizer is adsorbed on the nanocrystalline TiO2 and is in contact with the electrolyte as shown in Figure 1.  The solar-to-electric conversion in DSSCs is mainly dependent on the rate of electron injection from the sensitizer into the semiconductor, which is controlled by the location of the excited state of the dye with respect to the edge of TiO2 conduction band (CB), and the location of the ground state of the sensitizer with respect to the redox potential of the electrolyte.  When the cell is exposed to a light source, electrons are excited from the ground state of the sensitizer to its excited state, and depending on the excited state life time and energetic of those excitons, electron injection into the CB of TiO2 may take place. 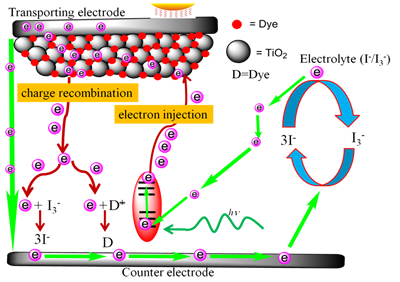 El-Shafei’s group focuses on the molecular modeling, synthesis and photophysics of novel panchromatic sensitizers for highly efficient solid and flexible DSSCs, to advance the science of DSSCs by enhancing the understanding of the interrelationship among molecular structures, charge recombinations and electron injections at the interfaces.

In our laboratory, DSSCs devices are assembled and characterized using incident-photon-to-current efficiency (IPCE) conversion and total solar-to-electric conversion under the illumination of simulated AM1.5 solar light (100mW/cm2).

Students working in El-Shafei’s group would have the opportunity to learn, gain experience and build unique skills in one or more of the following areas and techniques:

El-Shafei’s research thrust in this paradigm aims at: